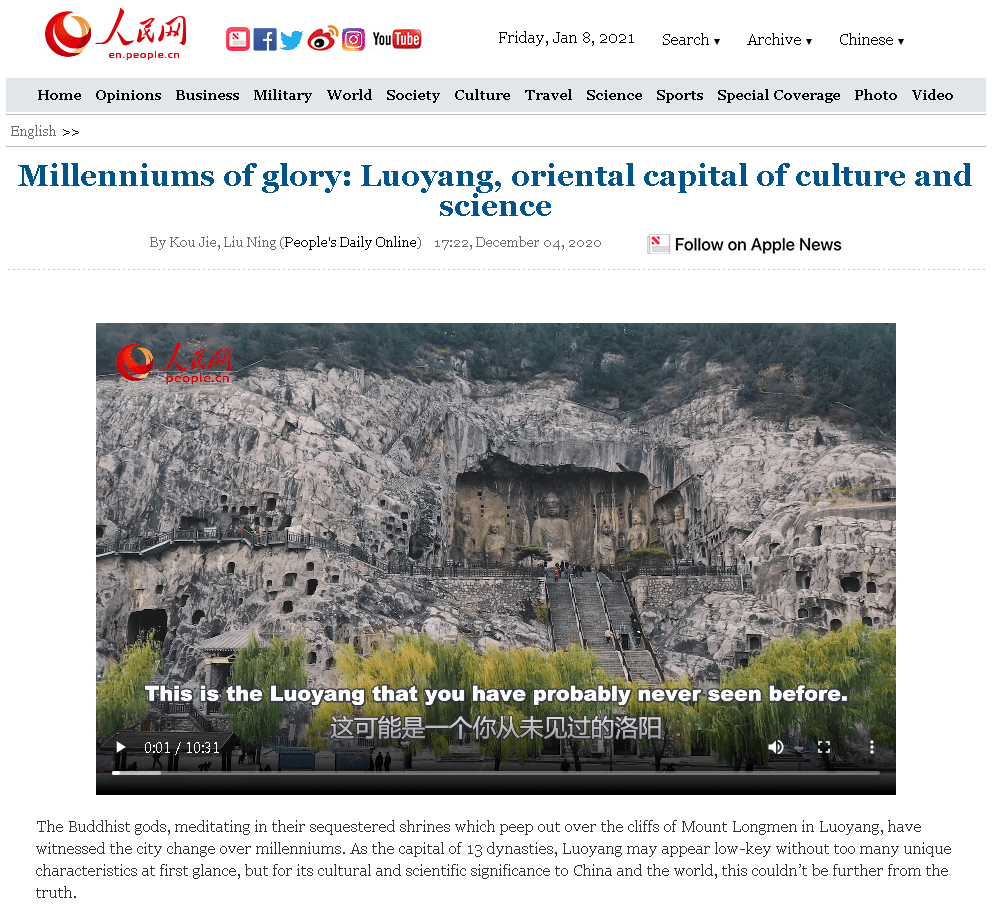 Millenniums of glory: Luoyang, oriental capital of culture and science

The Buddhist gods, meditating in their sequestered shrines which peep out over the cliffs of Mount Longmen in Luoyang, have witnessed the city change over millenniums. As the capital of 13 dynasties, Luoyang may appear low-key without too many unique characteristics at first glance, but for its cultural and scientific significance to China and the world, this couldn’t be further from the truth.

A starting point of the ancient Silk Road, Luoyang once stretched its cultural and commercial reach from the Yellow River to the Golden Horn. An unprecedented connection between the East and the West was established in Luoyang 1,854 years ago when the first Roman Empire envoy visited the city and was spellbound by its thriving international trade and vibrant fusion of culture.

Millenniums later, Luoyang’s dust-laden history has yet dwindled its global influence. It is a conglomeration of world-class museums and leading cultural industries, as well as the birthplace of the world’s first 5G driverless tractor. As a treasury of ancient culture and an incubator of high-tech inventions, Luoyang is reverberating with life along the “Belt and Road.” 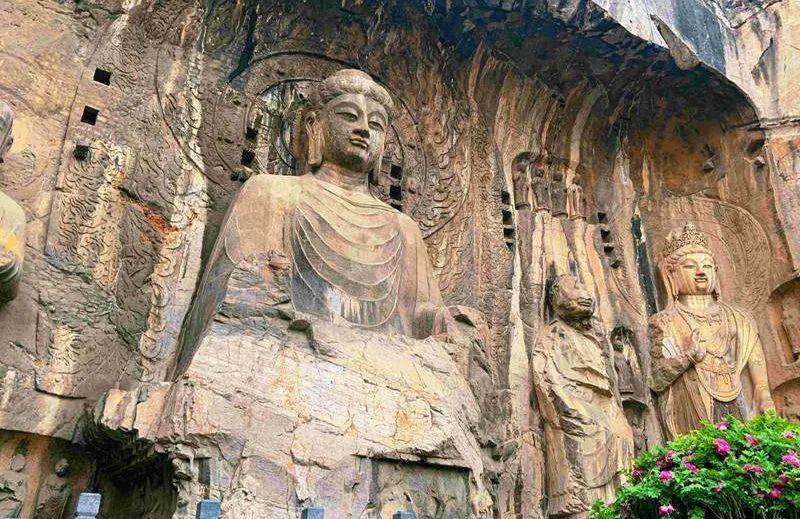 ▲The Longmen Grottoes, carved out of the limestone cliffs in Luoyang, house as many as 100,000 Buddha statues in over 2,100 caves. The Big Vairocana (Left) is the largest Buddha statue at the Longmen Buddha Grottoes, standing 17.14 meters high with 2 meter long ears. (People’s Daily Online/Kou Jie)

“Luoyang is a city of long history and high ambition. Its unparalleled culture has nourished Chinese civilization, while its advanced technologies and modern manufacturing industries have kept its vitality to date. It represents the harmonious coexistence of tradition and innovation,” said Zou Yirong, executive deputy director and robotic engineering expert from LAMIC, a Luoyang-based research and technological development center.

▲After millenniums, the White Horse Temple still serves as a cultural and religious center in China and the world. (People’s Daily Online/Kou Jie)

Nestled between a luxuriant mountain and a rapid river, the White Horse Temple stands out in silhouette. Solemnity and ancient beauty oozes through the cracks of the weathered Buddhist statues, while the winding cobblestone trails encircling the temple bear the imprint of time and footprints of pilgrims.

The birthplace of Chinese Buddhism, the temple was built under the patronage of Emperor Ming (58-75 AD) in the Eastern Han dynasty, who sent emissaries to seek for wisdom and friendship overseas. The emissaries brought back foreign sages, with countless Buddhist ures and books laden on two white horses. The temple was then built as an appreciation of the horses’ contribution, as well as a mark of ancient China’s cultural exchange with the world.

Today, a museum was built on site, attracting countless visitors both from China and abroad to enjoy ancient art and architecture. The temple itself remains an important tie between China and other nations. In 2008, a Buddhist shrine, that is a close replica of the Sanchi Stupa, was completed in the temple by the Indian government, serving as a symbol of China-Indian cultural exchange, while Thai and Cambodian style shrines are now under construction for a similar purpose.

The White Horse Temple is not the only historical site in Luoyang that preserves ancient culture while continuing to thrive in the modern era. Dubbed “the oriental capital of museums,” Luoyang has about 100 museums that harbor more than 4 billion cultural relics. The city’s abundant historical heritage has inspired local, cultural and creative industries, making it a new pillar of the city’s economy.

In the exhibition hall of the Luoyang Museum, advanced technologies and cultural innovation have injected a few raisins of modernity into the dough of history. Excited visitors are studying ancient artworks by using 3D screens and VR glasses, while crowded customers are selecting souvenirs designed by local cultural and creative companies, such as electronic passports that allow visitors to collect unique stamps from museums across China, as well as handbags embroidered with ancient patterns and traditional calligraphy.

“So far we have developed 37 kinds of creative products based on Luoyang’s cultural relics. Our cultural innovation has inspired visitors to study China’s history and culture, as well as creating lucrative income,” said Shi Yue, director of the relic protection and cultural development department of the Luoyang Museum. 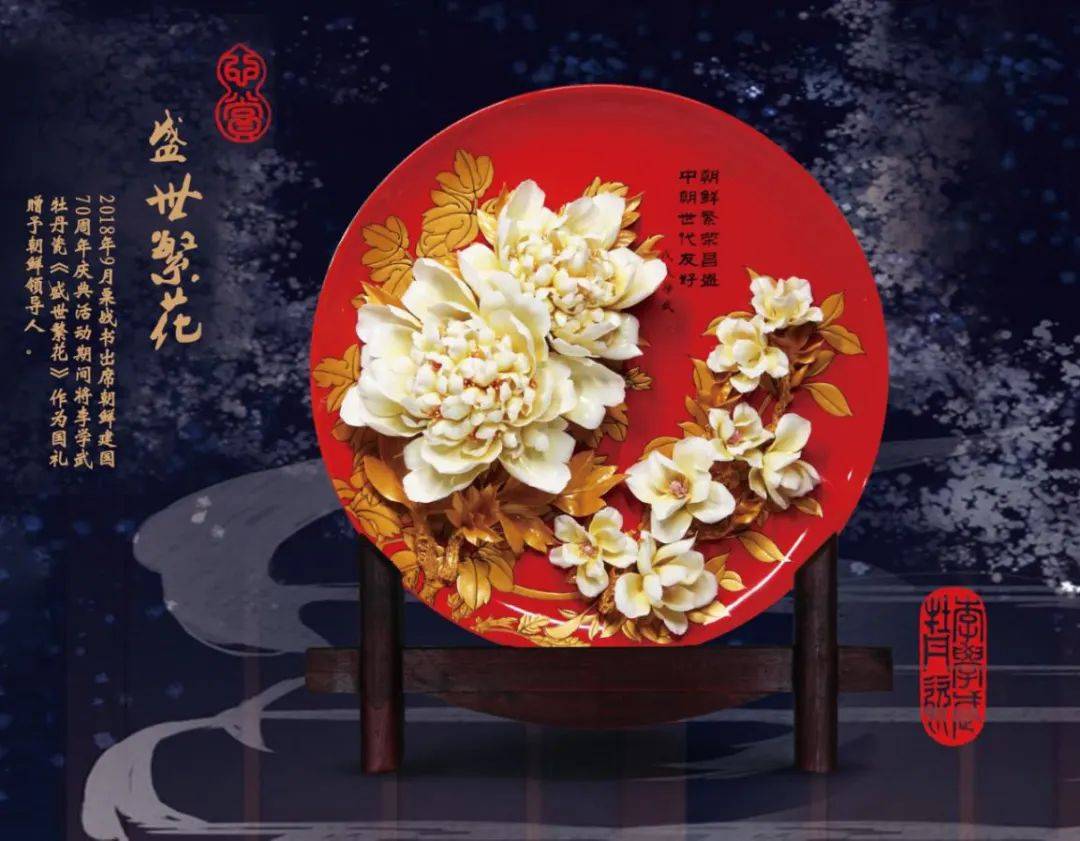 In addition to museums, Luoyang has also breathed new life into ancient history through its themed cultural festival and tourism activities. Known for its 1,500-year history of peony cultivation, Luoyang has established the Peony Cultural Festival, an annual festival to celebrate the blossom of the beautiful flowers. In 2020, despite the negative influence of COVID-19, the festival attracted over 29 million visitors, creating an income of more than 27.8 billion yuan.

Each year, over 50,000 peony-themed porcelain are sold both in China and abroad, creating an annual income of over 60 million yuan. Li’s artwork is selected by the Chinese Ministry of Foreign Affairs as national gifts to foreign leaders, while his peony-porcelain jewelry received a warm welcome from the wives of foreign presidents during the Shanghai Cooperation Organization Summit held in Qingdao in 2018. 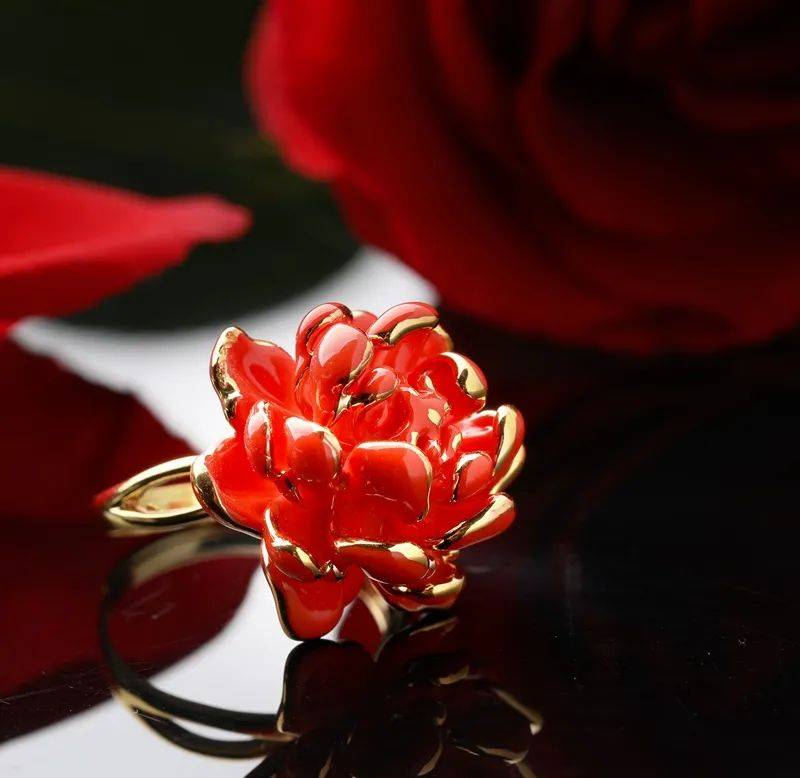 ▲Peony porcelain jewelry have now become a new trend of fashion, receiving a warm welcome from the wives of foreign leaders who attended the Shanghai Cooperation Organization Summit held in Qingdao in 2018. (Photo provided by Li Xuewu)

“In Luoyang, the old has never faded away and has nourished new opportunities. Our ancestors have brought our culture to the world through the ancient Silk Road, we are now doing the same – spreading our modern culture along the Belt and Road,” added Li.

Thanks to the successful combination of ancient culture and modern innovation, Luoyang now ranks number 10 among all Chinese cities in cultural creative industry, which is worth 28 billion yuan, accounting for five percent of the city’s GDP in 2020. 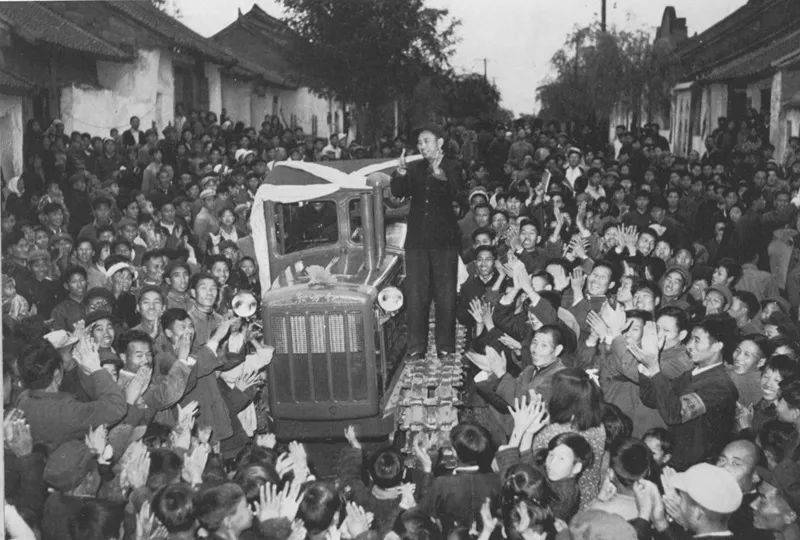 ▲In 1958, China’s first tractor, “Dongfanghong,” literally the “Oriental Red,” was manufactured in Luoyang. In a letter written by Bulekov, a Soviet tech expert who helped China’s industrial development, he noted: “Oriental Red, what an inspiring name! For thousands of years, Chinese farmers carried their hoes to work under the sun, but now, they are driving their own tractor to embrace the sun.” (Photo provided by YTO Group)

From China’s No.1 to global tech power

Throughout China’s history, you can hardly find any city that has valued scientific innovation as much as Luoyang. Three out of the four Great Inventions of ancient China - paper-making, print technologies and the compass - were invented in this city. Its zeal for science and innovation has been passed on until today, making it a tech hub in modern China.

Unlike the great ancient inventions, Luoyang’s modern tech innovation started from something much smaller – tractors. Though tractors were widely used in western countries in the 1950s, for over 800,000 villages across China at that time, cattle and plough were the only options for farmers.

Liang Jun, China’s first female tractor driver who passed away in 2020 at the age of 90, recalled her first time seeing tractors in 1948 in a previous interview.

“All the tractors we used were imported from the Soviet Union. I was amazed by the modern machine, but at the same time felt dejected, because it seemed far-fetched that I could drive a Chinese tractor someday,” said Liang.

The mission of creating China’s first tractor was designated to the Luoyang-based YTO Group Corporation. To Liang’s surprise, her dream became real sooner than she could have ever imagined. A decade after her first encounter with tractors, Dongfanghong (Oriental Red), China’s first self-designed tractor, was put into use on over 60 percent of the nation’s farmland. An image of Liang proudly driving Oriental Red was featured on China’s one-yuan banknote in 1960.

For the next few decades, the YTO Group Corporation has grown into a world leading agricultural machinery power. Its products have been exported to over 100 nations, while a large number of research center and tech labs were built overseas along the Belt and Road. In 2020, the company, along with its tech partner, Luoyang Research Institute for Intelligent Agricultural Equipment Co., Ltd., invented the world’s first 5G driverless tractor, which can plan routes and analyze agricultural data smartly, leading to a tech revolution in agricultural industry worldwide.

The development of tractors is merely the epitome of Luoyang’s modern tech innovation. As of 2020, Luoyang has 1796 industrial enterprises with an annual business revenue of 20 million yuan or more, covering a wide range of high-tech sectors including robots, high-speed rails and energy saving batteries. 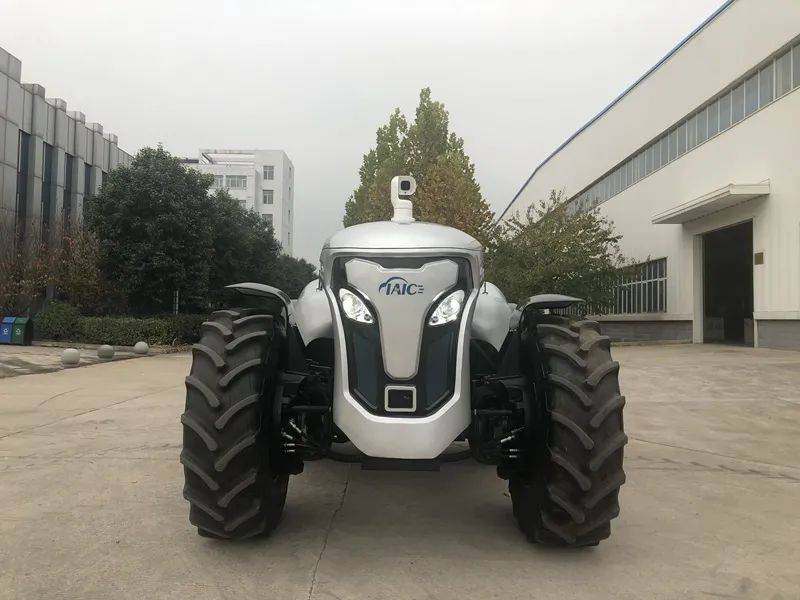 ▲The world’s first 5G driverless tractor was invented in Luoyang in 2020, which has the potential to significantly change the world’s agricultural industry. (People’s Daily Online/Du Mingming)

The city has also launched favorable policies, as well as established a national innovation demonstration area and seven national key labs to attract talents and tech start-ups. Zou and her Tsinghua University colleagues started their research base in Luoyang four years ago, which now has 18 teams with various focuses on high-tech areas such as robot and smart-manufacturing and advanced agricultural machinery, cooperating with 1,722 companies nationwide, while over 30 research projects are expected to be put into manufacturing soon.

“With its solid industrial base and favorable policies, young scientists like us can realize our ambitions, further strengthening Luoyang’s tech advantages. The robots we designed are now widely used in factories, providing smart solutions to upgrade industry. We hope our high-tech products can become Luoyang’s new name card,” Zou said.